How Gene Editing Could Help Reduce Hunger and Poverty

An estimated 2 billion people did not have regular access to safe, nutritious, and sufficient food in 2019, according to an annual study by the United Nations. Gene editing is an innovation in plant breeding that could provide new solutions to this food insecurity crisis by:

• Developing crops that are more resilient to droughts, floods, and higher temperatures — providing a larger and more stable supply of food.

• Sustaining agricultural economies in developing countries, where many people in rural areas depend on farming for food and income.

Gene Editing Is a More Precise Form of Plant Breeding

In the gene editing process, scientists use a DNA sequencemolecular tool like CRISPR to make targeted improvements to a plant’s DNA, typically working solely within the plant’s own family. Two of the biggest advantages of gene editing are its precision and efficiency. These advantages allow plant breeders to achieve the same objectives that could be accomplished through more traditional breeding methods — but in years instead of decades, and with greater precision than ever before.

For example, traditional breeding uses genetic reshuffling of parent plant DNA to generate changes across an offspring’s genome. By using gene editing, scientists can identify beneficial or problematic genes in a plant, like a gene in a rice plant that makes it more susceptible to disease. Breeders then can use gene editing to deactivate that specific gene to increase the plant’s resilience. 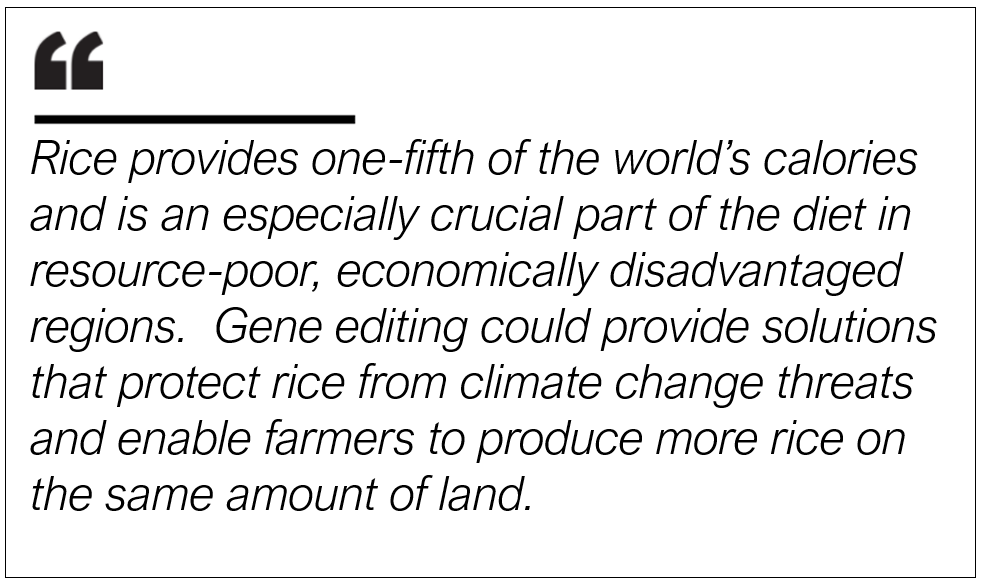 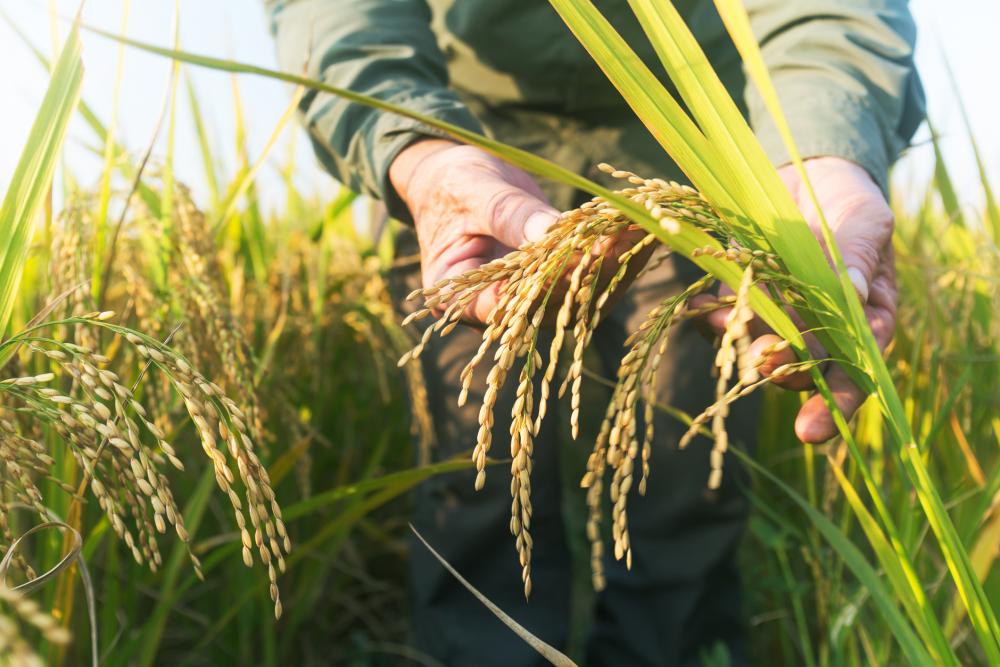 HOW CAN GENE EDITING HELP KEEP PEOPLE FED AND NOURISHED?

Gene editing provides potential solutions to hunger and malnutrition in several ways. These benefits include:

• Crops that are more resilient to the impacts of pests, diseases, and climate change

• Higher-yielding crops — that is, crops that can produce more food on the same amount of land

Finding solutions to hunger and malnutrition should always be a priority. With climate change already impacting the health and yield of crops and the global population continuing to grow, this imperative is gaining even more urgency. Gene editing’s precision and efficiency can help address this challenge.

“New plant-breeding technologies such as genome editing will be able to contribute substantially to global food security,” according to seven agriculture and biotechnology researchers in a Science magazine article they coauthored in March 2019.

1. Providing protection from insect pests. Researchers are identifying ways for gene editing to provide pesticide-free defenses to crops, like sweet potatoes, by using attributes found in other varieties of the same plant. Finding solutions like these will become critical: One study found that for the three most important food crops — wheat, rice, and corn — the yield lost to insects will increase by 10% to 25% per degree Celsius of warming, because insect populations and their appetites surge in warm temperatures.

2. Growing crops with less water. In a major breakthrough in 2018, scientists discovered that by altering the expression of a gene that is found in all plants, they could make tobacco plants 25% more water efficient. Now they are testing this characteristic on food crops. That’s going to become particularly important given the expected increase in droughts.

3. Increasing heat resistance. High temperatures inhibit plant growth, but gene editing shows promise in counteracting the impact. For example, recent research shows that gene editing can be used to breed heat tolerance in tomato plants, and there are some promising developments in doing the same with lettuce.

4. Reducing food waste. The U.N. Food and Agriculture Organization has estimated that one-third of all food worldwide is lost as it is moved from where it is produced to where it is eaten, or wasted when it is thrown away prematurely because of its appearance. Gene editing can cut potato waste in half — and dramatically reduce the waste of other foods — by making vegetables and fruits more resistant to browning and bruising.

5. Improving the nutritional value of foods. Researchers are exploring the use of gene editing to increase a plant’s nutritional value. For example, they are developing varieties of sorghum varieties that are higher in lysine, a vital amino acid. Sorghum is the dietary staple of more than 500 million people in 30 countries.

6. Making foods safer. Researchers are exploring ways to use gene editing to preserve cassava nutrients while removing cyanide. In Eastern and Central Africa, cassava is the primary staple of the diet. Unfortunately, without proper precautions that people in poor areas cannot always take, the amount of cyanide in the root vegetable can cause severe damage to physical and mental health.

7. Boosting crop yield. Researchers are using gene editing to develop rice that has greater resilience and higher crop yields compared with traditional rice. Gene edited rice includes varieties that thrive on marginal soil, helping farmers make the most of the land that’s still available. Yield increases are critical because an estimated 40% more rice will be needed by 2050 to meet the food needs of an ever-increasing population.

WHAT IS THE CONNECTION BETWEEN GENE EDITING AND ALLEVIATING POVERTY?

Gene editing could help increase the incomes and self-sufficiency of people in developing countries, in part because agriculture is so important to the economies of rural areas.

1. Making land farmable and more productive. Gene editing could increase the types of soil in which crops can be grown and the amount of a crop that can be produced on a given amount of land.

3. Enabling farmers to grow crops with fewer resources. By developing plants that grow with less land, water, and pesticides, gene editing could help reduce some of the economic constraints that limit farmers’ options for producing crops.

4. Preventing the spread of malaria and other diseases. Several gene editing approaches are showing promise in reducing the spread of disease, and the impact could be substantial. According to the European Alliance Against Malaria, the impact of this disease — most prevalent in the poorest countries of sub-Saharan Africa — slows economic growth and development and perpetuates the vicious cycle of poverty. Countries that have been able to reduce malaria rates have shown substantial growth and improved prosperity.

Gene editing’s agricultural innovation will continue to expand the possibilities for sustaining and increasing the food supply, producing more food with less resources, and supporting rural economies. The articles below highlight just a few of the gene editing discoveries that could make a difference.

Learn More About How Gene Editing Can Address Hunger and Poverty

Getting to the Root of the Problem

Besides being cold-weather recipe favorites, potatoes, sweet potatoes, and cassava have something else is common. All of them can benefit from gene editing.

Amit Dhingra has a deep passion for nutritious food. His childhood experiences growing up in India motivated him to pursue a career in crop improvement.