Why Gene Editing Is a Climate Change Solution

Gene editing is a breakthrough solution that could help reduce and address the impacts of climate change. This advancement in breeding techniques can bring innovation and nature together to help decrease greenhouse gas emissions and remove excess carbon from the atmosphere. Gene editing also has the potential to help crops survive climate change-driven increases in droughts, flooding, temperature, soil salinity and acidity, numbers of crop-destroying insects, and more. That means greater protection for food supplies that are essential to communities around the world.

A Breath of Fresh Air for Climate Change

Gene editing-enabled changes in plants that allow them to capture and store more carbon could reduce up to 46% of the excess carbon emitted annually worldwide.

Gene editing-enabled changes in plants that allow them to capture and store more carbon could reduce up to 46% of the excess carbon emitted annually worldwide.

Time is of the essence. Two of the biggest advantages of gene editing are its precision and efficiency. These advantages allow plant breeders to achieve the same objectives that could be accomplished through more traditional breeding methods — but in years instead of decades, and with greater precision than ever before.

Gene editing is a type of plant breeding in which scientists use a molecular tool like CRISPR to make targeted improvements to a plant’s DNA, typically working solely within the plant’s own family. For example, scientists used gene editing to identify a gene in tomatoes that could be rendered inoperative to make the tomatoes more tolerant to heat.

Compared to other breeding methods, gene editing’s more efficient and targeted approach is critical to quickly adapting and responding to urgent issues like climate change.

Gene editing can address climate change and its impacts in two ways:

• Reducing emissions of greenhouse gases that contribute to climate change, like carbon dioxide.

• Increasing the resiliency of crops against the impacts of climate change.

1. Capture carbon in crop roots. Gene editing can enable crop plants to grow bigger, deeper roots that are incredibly effective in capturing carbon and keeping it sequestered in the soil for longer periods of time instead of releasing it into the atmosphere when crops are harvested. These gene-edited plants could reduce up to 46% of the excess carbon emitted annually worldwide if they became a fixture in the agricultural food chain.

2. Replenish carbon-absorbing trees. Gene editing can make American chestnut trees resistant to the exotic plant disease that rendered them nearly extinct, allowing for the restoration of native forests. As a fast-growing tree, American chestnuts absorb and store large amounts of carbon to fuel their own growth.

3. Provide sources of low-carbon biofuel. Gene editing can create varieties of a plant called pennycress that are high in oleic acid — well-suited for conversion into biofuel for jets because of its stability. Many farmers already use pennycress as a cover crop in their off-season to help prevent soil erosion and keep vital nutrients in the soil. The gene-edited variant, CoverCress, could generate new income for farmers while becoming a low-carbon source for billions of gallons in jet fuel each year.

4. Reduce emissions from food waste. Gene editing can cut potato waste in half — and dramatically reduce the waste of other foods — by making vegetables and fruits more resistant to cosmetic blemishes like browning and bruising. Food waste is responsible for an estimated 8% of all greenhouse gas emissions, including methane, according to an analysis by the United Nations Food and Agriculture Organization.

5. Stem emissions from fertilizer production. Gene editing can enable commercial corn to access nitrogen from the air, eliminating the need for nitrogen-enriched fertilizer. The production of that fertilizer results in significant greenhouse gas emissions. Nitrogen is an essential nutrient for crops, boosting the volume that can be grown on a given plot of land.

The global rise in temperature makes food production more difficult and resource intensive. It has also led to increasing crop damage from heat, drought, flooding, soil salinity, and plant-damaging insects. One study found that for the three most important food crops — wheat, rice, and corn — the yield lost to insects will increase by 10% to 25% per degree Celsius of warming because insect populations and their appetites surge in warm temperatures. 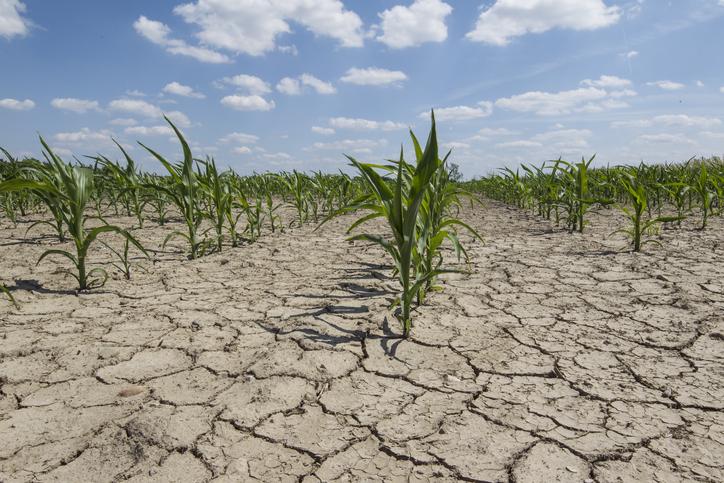 1. Reduce water requirements. Gene editing provides the opportunity to develop crops that require less water to grow. In a major breakthrough in 2018, scientists discovered that by altering the expression of a gene that is found in all plants, they could make tobacco plants 25% more water efficient. Now they are testing this characteristic on food crops, like lettuce.

3. Boost tolerance for acidity. Rice is a major food source for 3 billion people worldwide. Research teams are characterizing the genes in rice plants that can help them tolerate the increase in acidic soil that is driven by changes in climate. These genetic characteristics can be precisely mimicked in regionally important rice varieties to make the plants more resilient.

4. Suppress insect populations. Scientists are studying gene editing in insects that can be used to suppress the population of insects that damage crops. In the future, this could protect crops from dangers like the locust swarms that swept across Eastern Africa and destroyed farmland in 2020.

Gene editing will continue to expand the understanding and the development of new ways to reduce greenhouse gas emissions, capture carbon, and make crops more resilient to the impacts of climate change. In the articles below, we highlight the latest discoveries and explain how they can help create a more sustainable future.

LEARN MORE ABOUT HOW GENE EDITING CAN ADDRESS CLIMATE CHANGE:

• Dr. Kasia Glowacka: Plants That May Thrive With Less Water